With new galleries, learning studios and spaces for hospitality and retail, St Fagans restoration and extension project also brings improved orientation and legibility to the award-winning building, giving the museum the entrance it never had. It has won the National Eisteddfod Gold Medal and the RICS Wales Tourism and Leisure award. 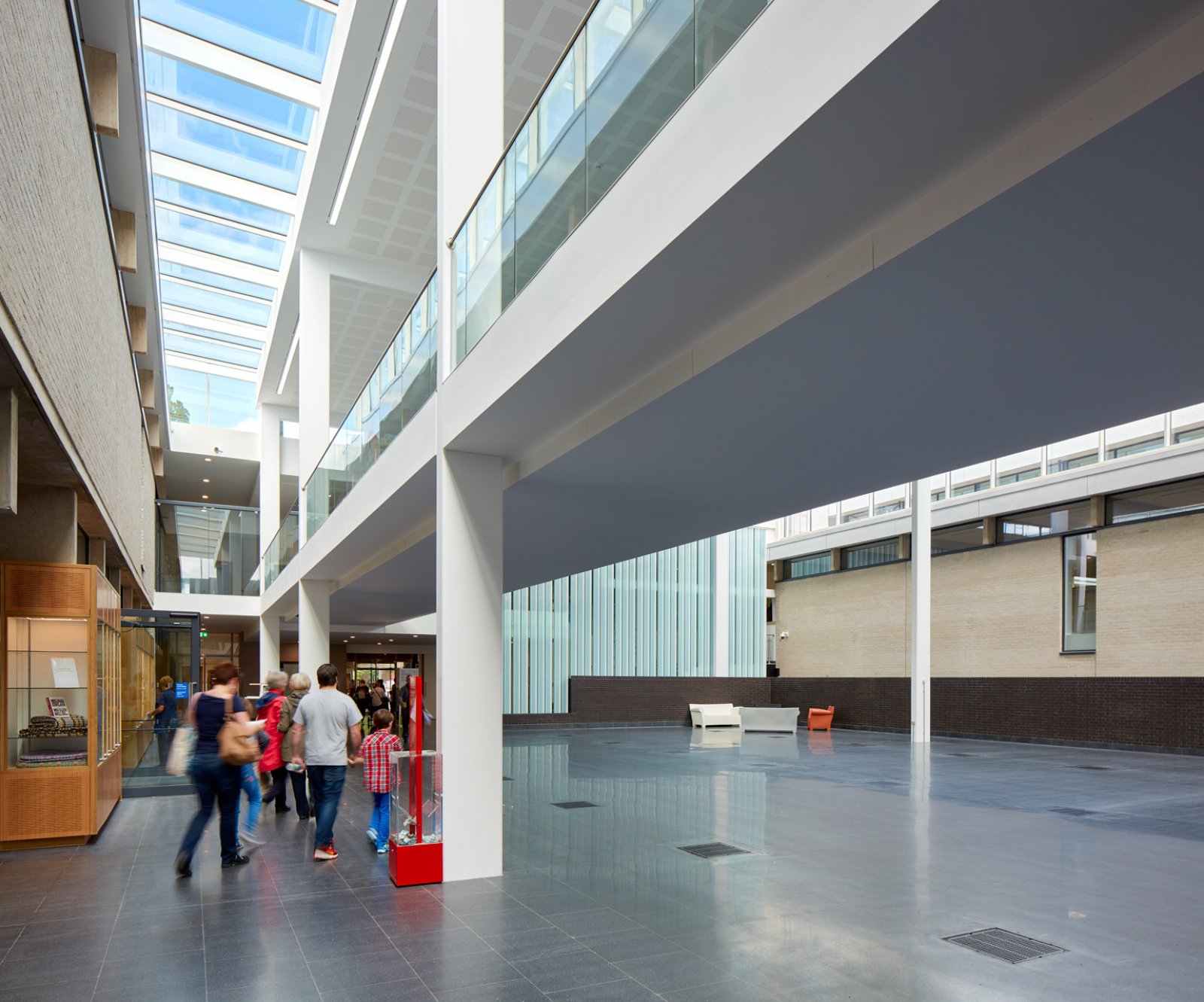 Building on our experience as architects to the cultural and heritage sectors, our understanding of how to balance potentially conflicting demands of historic significance, operational and environmental performance and commercial sustainability is often applied to internationally significant historic buildings and places. Here, at the most visited cultural destination in Wales, we redeployed our skills on one of the nation's most recently listed modern masterpieces. 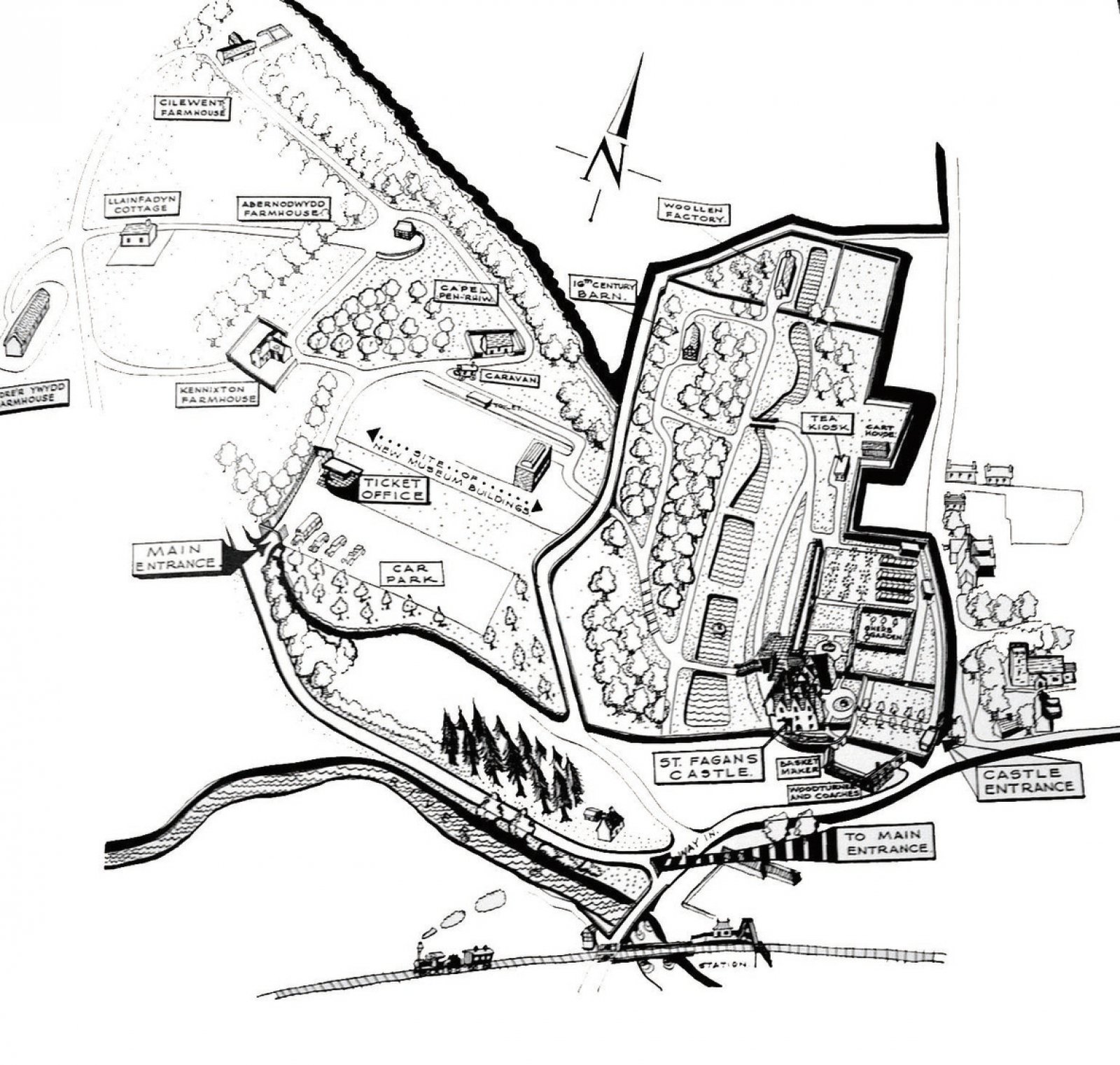 The ambition to create an open-air museum dedicated to Welsh rural life was first approved in 1930 but did not began to take shape until 1951. At this time the nation was engaged in a concerted post-war effort to build a better future, in a manner epitomised the Festival of Britain with dual interests in nostalgia and progress. Eight decades on, St Fagan’s continues to encapsulate this duality.

Set within the gardens and curtilage of St Fagan’s Castle, the museum’s interest in the past focused on the engagement of visitors with lost and dying traditions, through the relocation and reconstruction of authentically built structures. The Museum’s more progressive ambition was to build a modern forward-looking building to house a more ‘scientific’ exhibition of the materials and life of welsh culture. This came in the form of the now listed building by Percy Thomas and Son, completed in multiple phases between 1965 and 1976.

Inspired by research trips with the client, organised by partner Dale Owen and project architect John Hilling, the design exhibits the architectural qualities pioneered at other world class open air museums, including Munch Museet, Osal (by Fougner and Myklebust) and the Louisiana Musuem of Art, in Denmark (by Bo and Wohlert). Influenced by these buildings’ sympathetic yet assertive relationship to the landscape, St Fagan’s main building is characterised by strong horizontal silhouettes, balanced compositions of solid and void, and the repetitive vertical articulation of structure and fenestration. 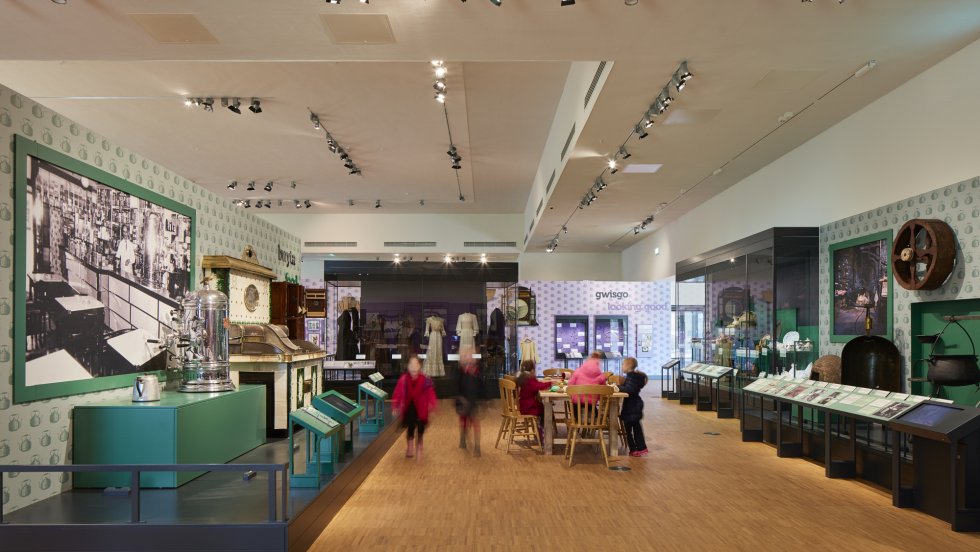 In 2012, the Heritage Lottery Fund awarded St Fagans Natural History Museum the largest grant ever awarded in Wales, contributing £11.5m to a site wide regeneration projects. As part of works to improve the site’s infrastructure, landscape, car parking, exhibitions and interpretation, we were appointed to undertake the refurbishment and adaptation of the main building and to prepare a Conservation Management Plan, Condition Survey and Maintenance Plan for its sustained future. 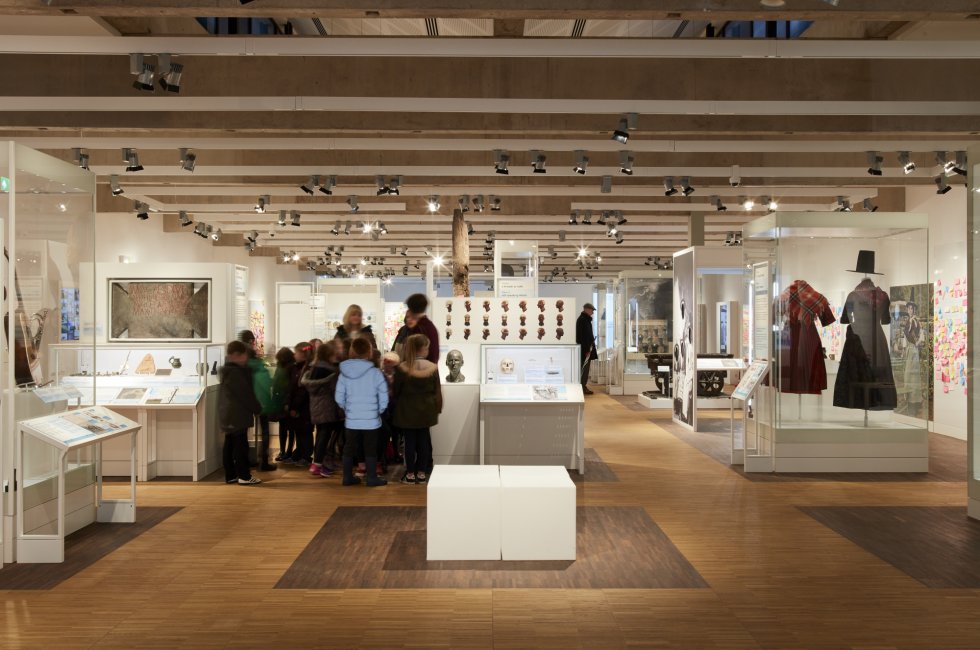 Initially the project objectives focused on the visitor experience of the building and the environmental conditions within the gallery and storage areas, however, through close consultation with the client and conversations with a member of the building’s original design team, it became clear that a more comprehensive reappraisal of the building was required. An appraisal that would look beyond the building’s distinctive modernist concrete fins, brick walls, and glazed clerestories to consider how improvements to the relationship between building and setting could significantly the visitors’ ability to orientate themselves and navigate their way around the site. 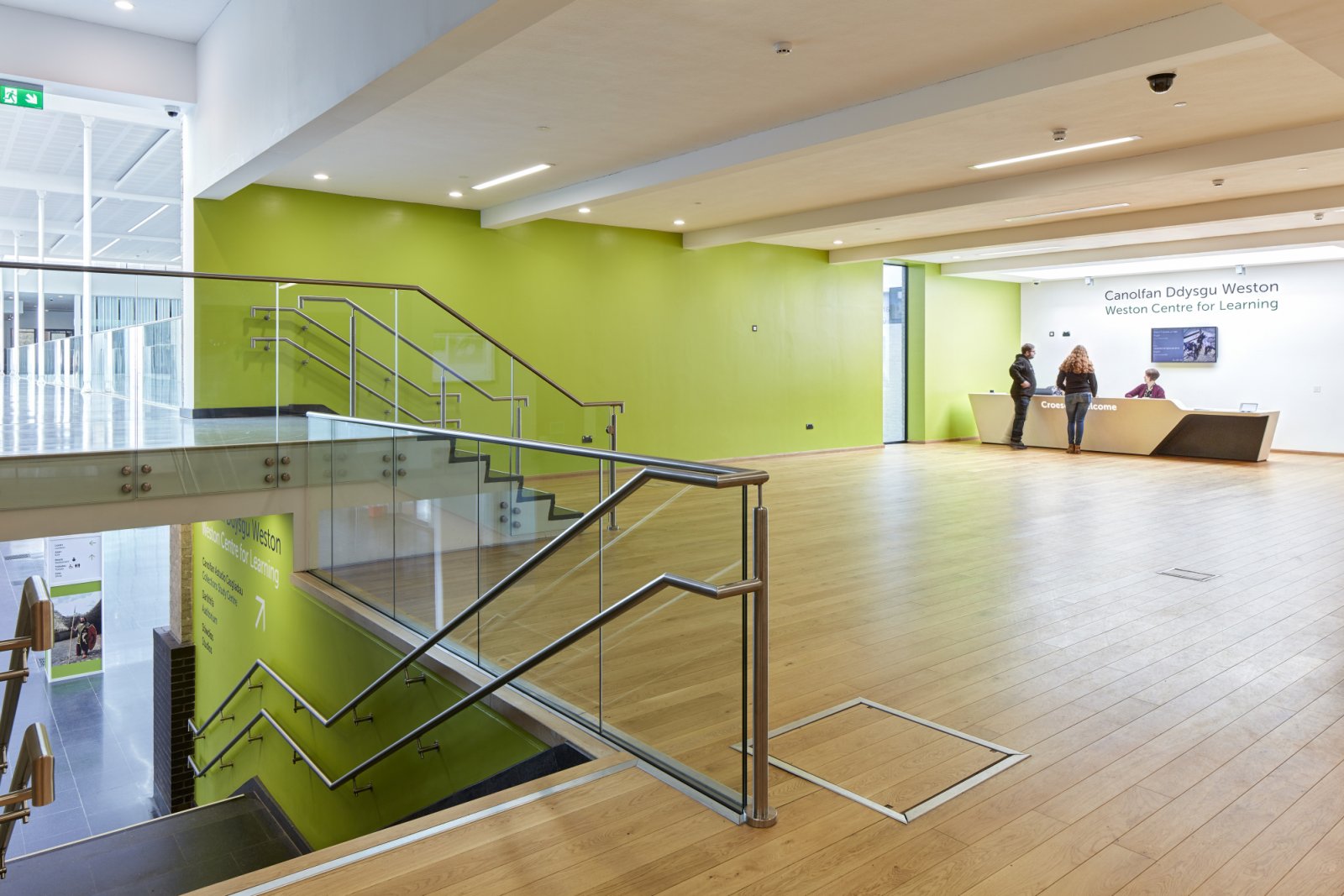 Victim to its own success, with visitor numbers increasing year on year from original expectations of 100,000 people, the management of car and coach parking was always a key challenge. Originally designed to be approached from the modest carpark that served the Castle and entered at upper ground level to the north, before opening its doors, the decision was made to relocate the main carpark on undeveloped land to the south. The result being that the building’s now celebrated two story elevation was immediately compromised, never to be discovered as part of the visitor journey as the articulated modernist backdrop to a south facing landscape that the architects intended, but instead inappropriately promoted to principal arrivals façade, albeit with no formal articulation to signal a controlled point of entry. Attempts were made to remedy this, most recently in the addition of a 1990s a fabric canopy, however, it was clear that a more radical reconfiguration of the building was required if the museum was to cope with visitor numbers that now approach 750,000 people each year, including increasing number of school parties that can add 1200 or 40 coach loads of children each day. 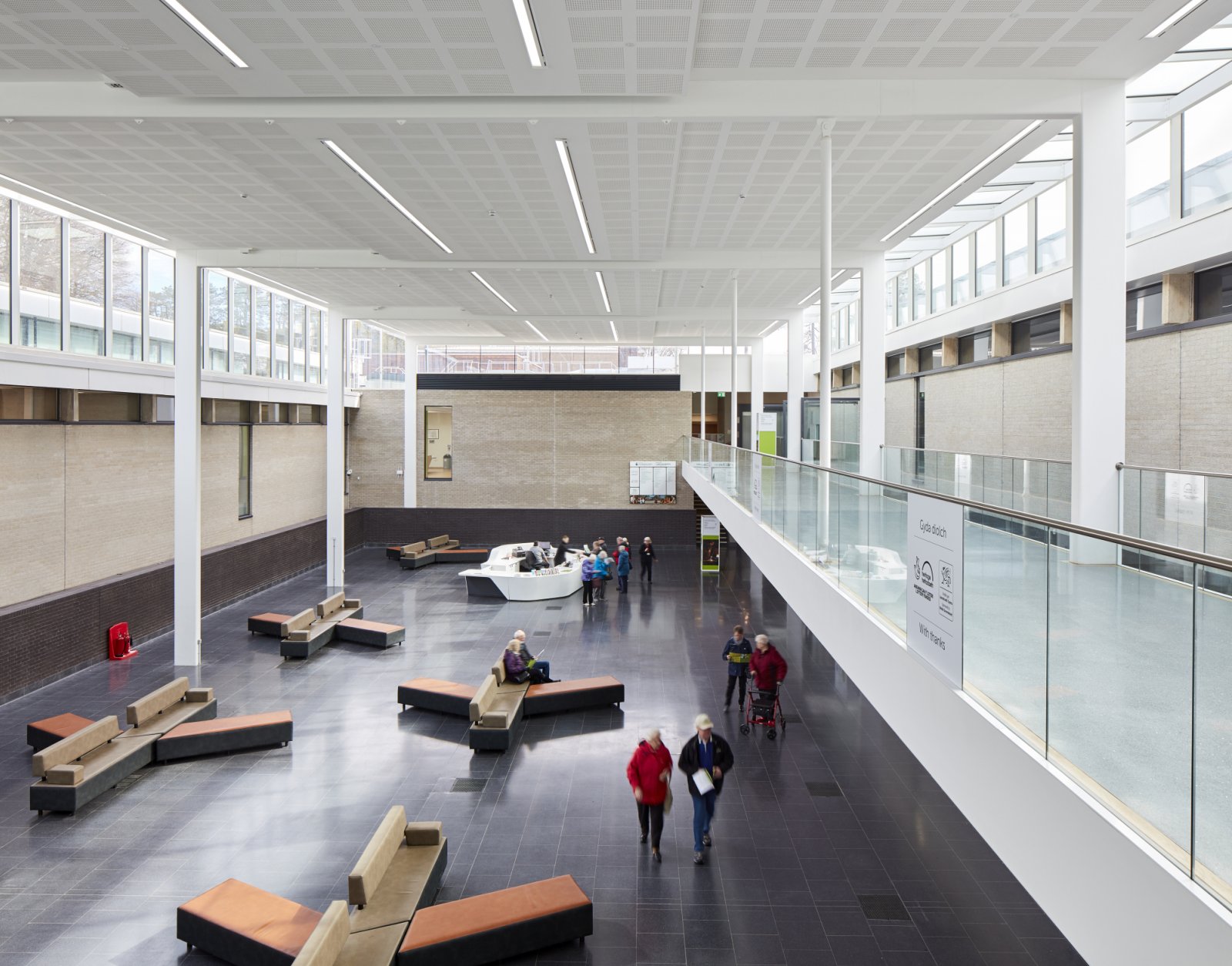 This scrutiny resulted in the principal architectural move to remove confusing additions from the 1990s and create a new orientation space at the heart of the building by re-appropriating the previously unused courtyard. To the west of this we proposed the construction of a circulation hub containing new hospitality and exhibition space, while the existing ranges were meticulously restored and refurbished to provide retail and exhibition space to the south, and learning and participation studios to the north and east. 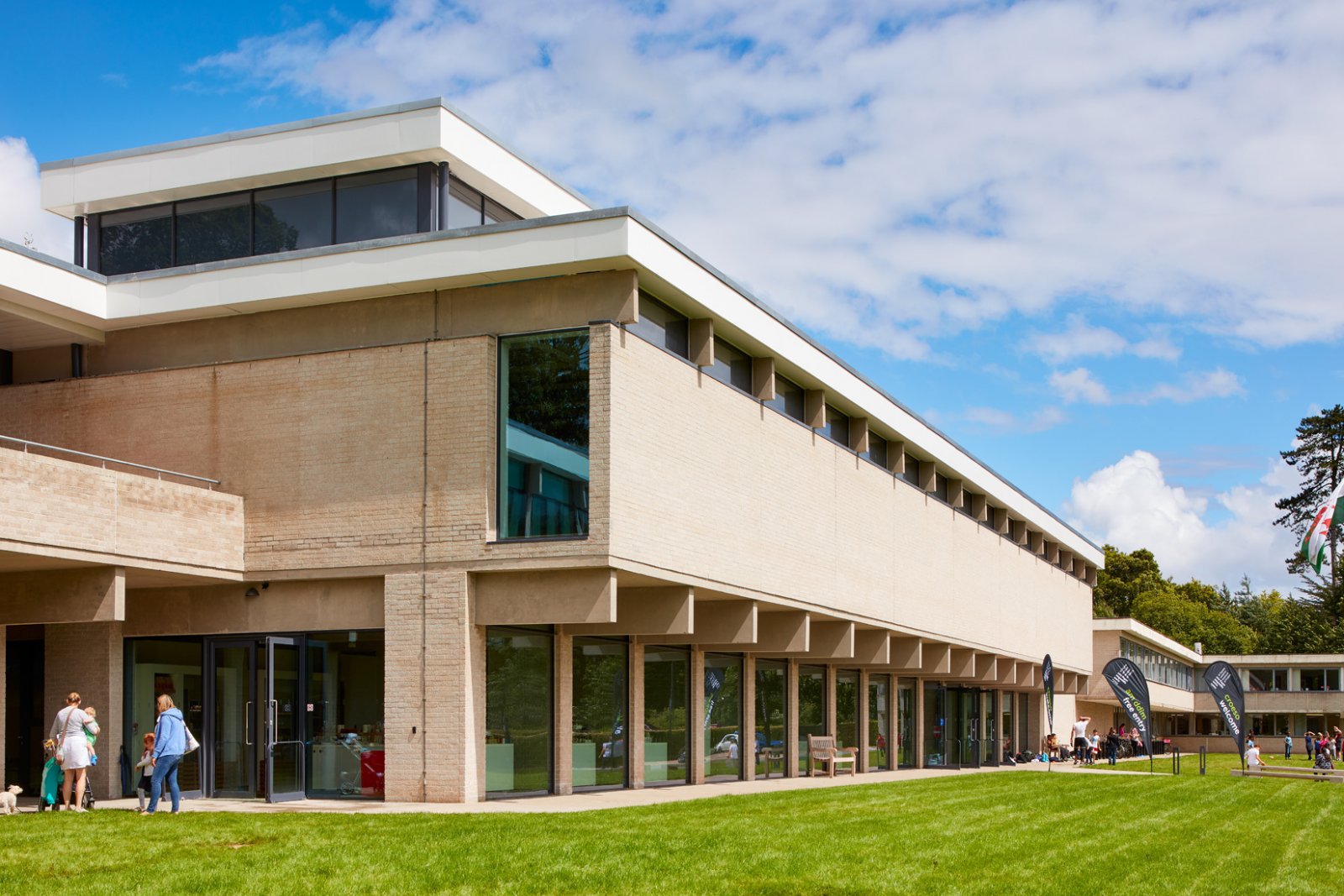 As a result of these virtually invisible interventions, visitors now approach a much more open and permeable south façade that leads into the central orientation space flanked by café and retail spaces. From here they can either gain direct access to the gardens via the new café at lower ground level, or rise up to the upper ground floor level, where principal exhibition and activity spaces are arranged around the former courtyard. With the new hub providing split level access to the gardens, the new configuration effortlessly sets visitors up for a clockwise or anticlockwise routes through the landscape and exhibits, before returning them to the building at a different level. 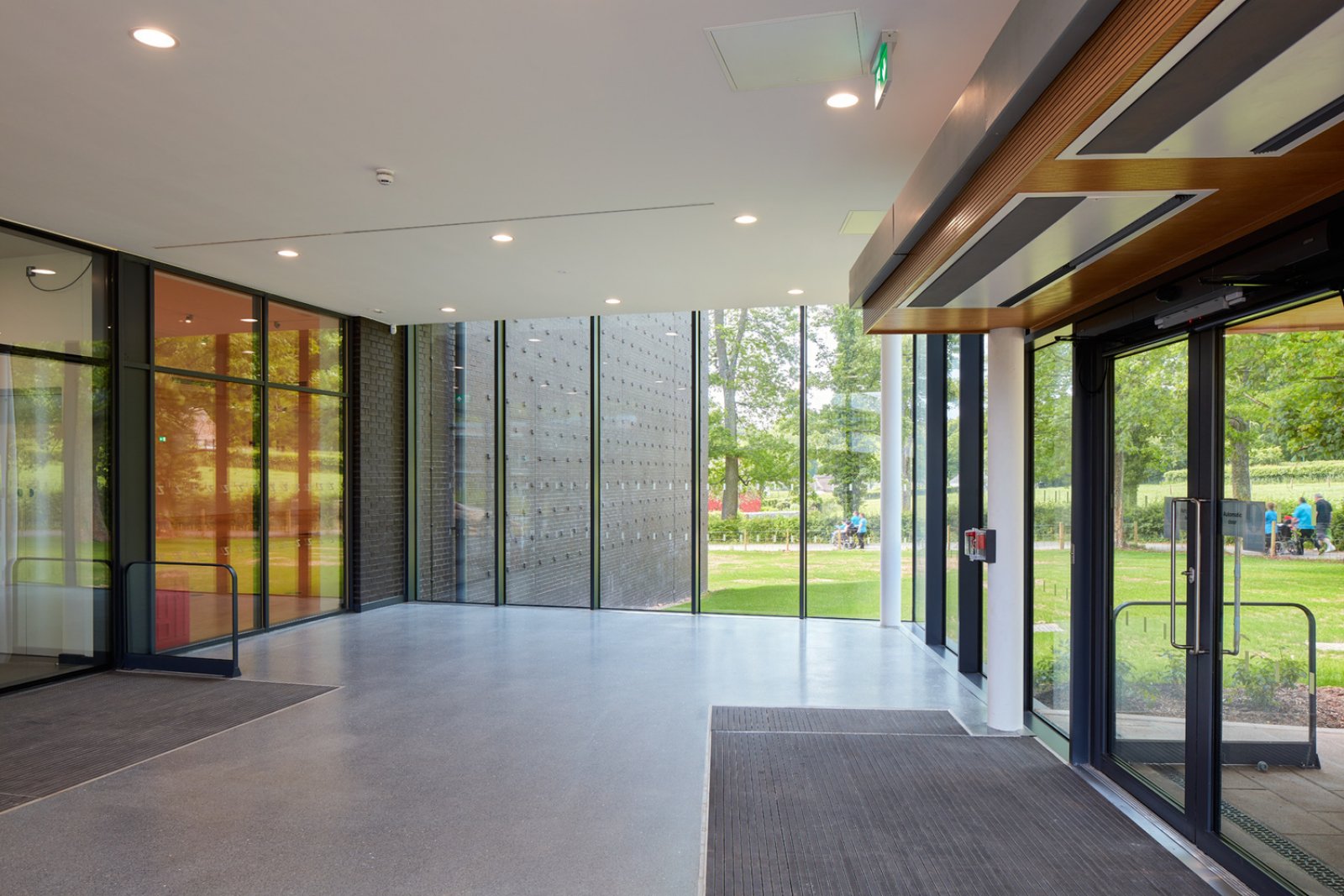 As would be expected as part of such an established and significant cultural organisation, the client group at St Fagans was broad in number and deep in expertise. As such, despite our potentially overwhelming instinct to respond to this building’s extremely powerful architectural identity, our team of designers focused first on understanding and balancing the factual requirements of the place with the aspirations of its people.

With operation and estate managers, catering and retail staff, educationalists and curators – the architectural response went beyond stitching together new and existing spaces to effectively stitching together of a broad range of opinions, demands and ambitions. We addressed this by working with the client on a series of proximity diagrams, first mapping their preferred relationship and circulation flows to scale, before overlaying these on plans of the existing building to see where adjustments and opportunities for improvement existed. This helped all stakeholders visualise and understand priorities, feel engaged in final decisions that emerged naturally and with a sense of inevitability and harmony. Through this we met and exceeded the client’s aspirations to open up the previously constrained ground floor, to improve legibility and orientation, to provide more space for events and activities, and to enhance physical and visual links to the open air museum and immediate landscape.