Purcell Architect Natalie Widdowfield recently took part in a Building Conservation Masterclass on the Conservation of Historic Concrete. As a member of Purcell’s C20 Group, Natalie attended the course with a view to disseminating key elements of the course to the C20 Group and furthering Purcell’s ability to provide technical expertise and advice on historic buildings of the recent past. Concrete repair is no longer in its infancy but can still be regarded as an emerging science – the practical applications of which are varied and potentially different for every site. Standards for concrete construction were varied throughout the Post-War period and consequently, the qualities of various mixes on various sites is different. This course, which has been running for a number of years, provides a baseline of core principles for how to approach the conservation of concrete, based on a bespoke approach. 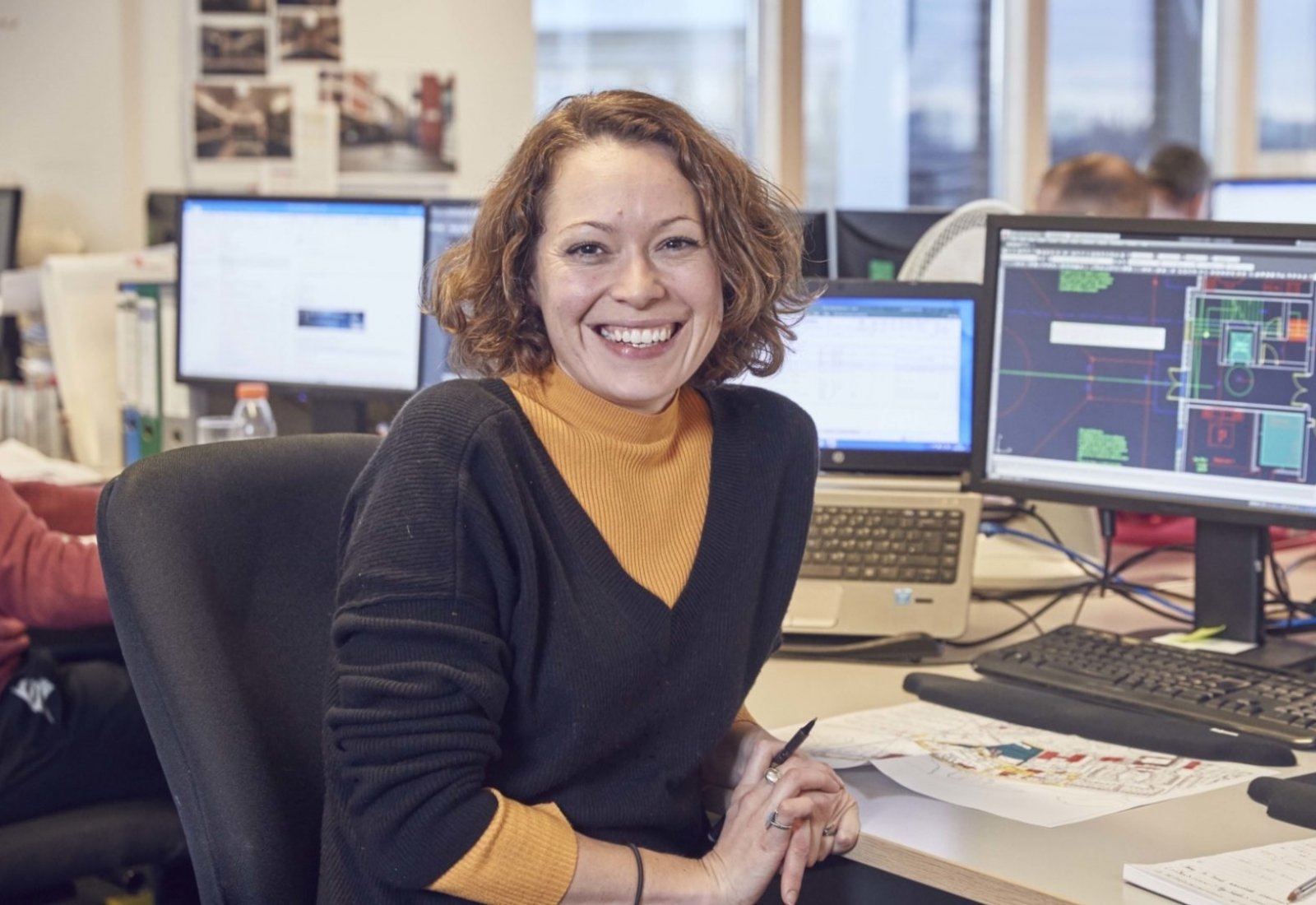 The course took place at West Dean College for Arts and Conservation, part of the Edward James Foundation whose mission is to provide "the highest quality education in creative arts and conservation and be internationally recognised as a centre of excellence." Edward James left his estate specifically for the development of traditional skills. Between 1949-1984 James built Las Pozas, a surreal collection of concrete structures in the mountains to the north of Mexico City. 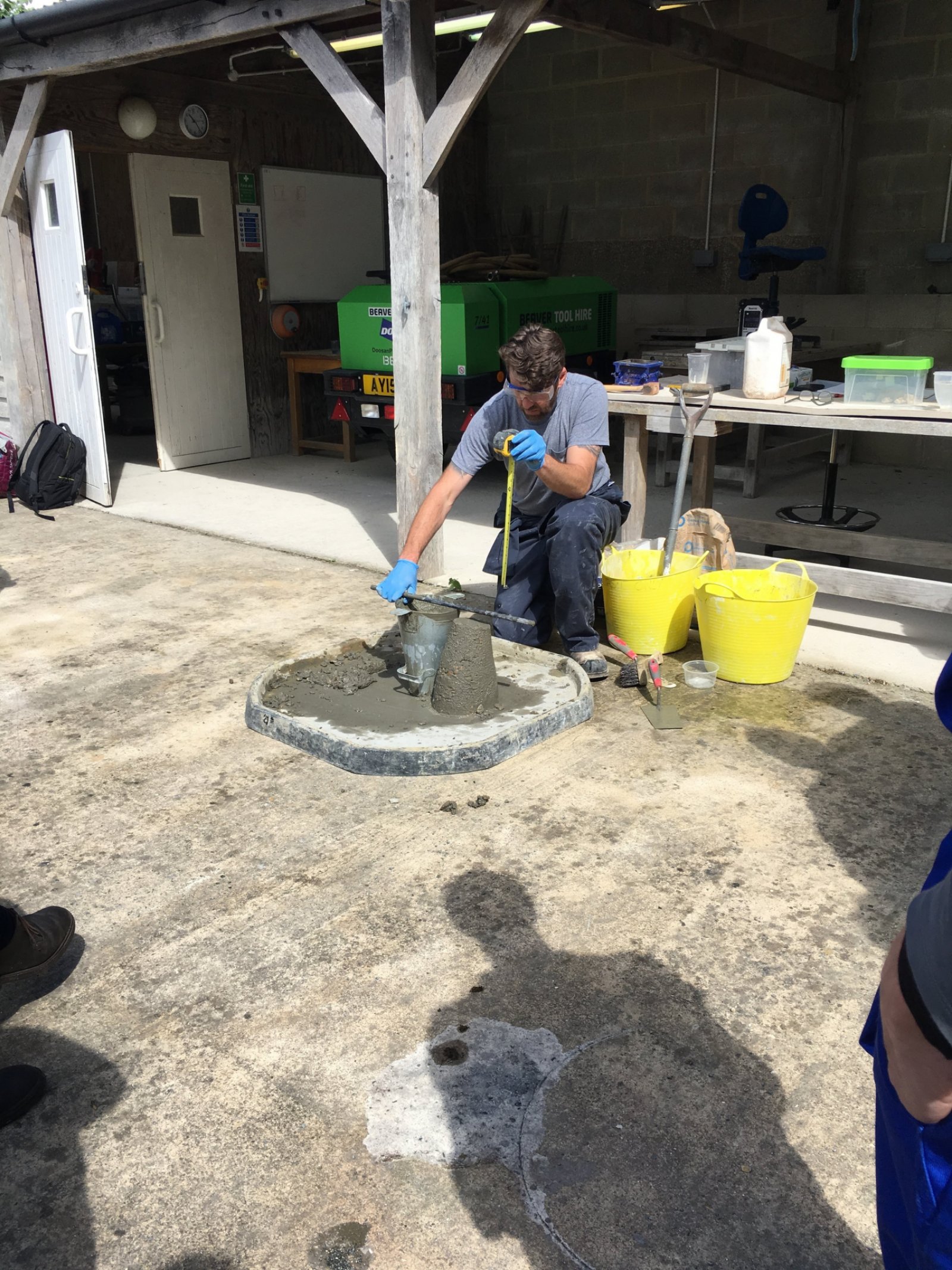 The first day involved a slump test and cube test. The initial slump test was carried out with a 20-30mm aggregate and grey cement at a mix ratio of 5/1. Once mixed, the wet concrete was poured into a funnel which was gently removed and placed adjacent. We watched to see that the concrete slumped in a regular fashion rather than shearing, thus indicating a consistent mix. The distance of the slump was measured from the top of the funnel at 30mm, indicating a grading of S1.

We repeated this process, adding more water to the mix and saw a significant difference in the measurement from the top of the funnel. The second test was 140mm, at the higher end of S3. The lower water content makes for stronger concrete, more water causing potential for shrinkage and cracking. We also cast a cube mould for later testing. These indicate compressive strength of the specific mix. Both techniques should be used on site to test the concrete batch. 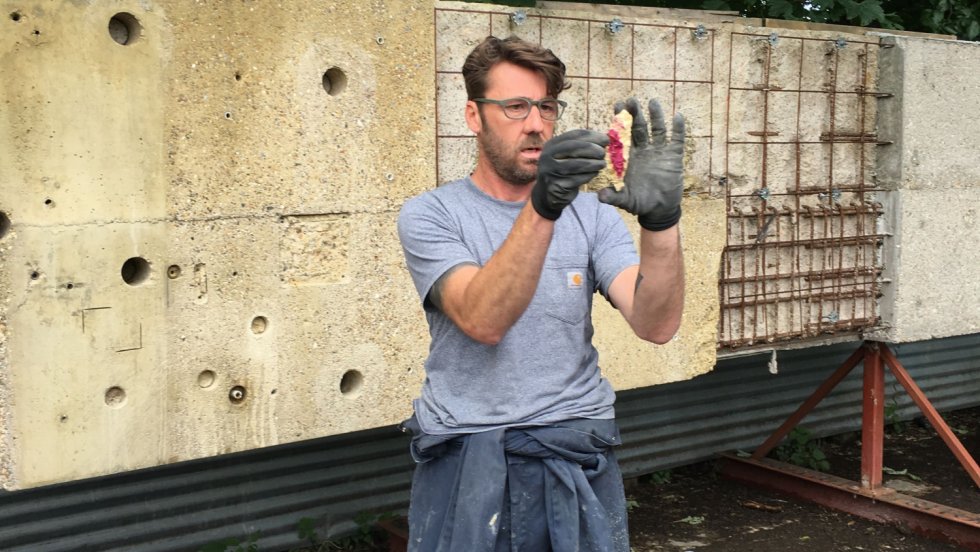 The sample panel shown enabled the designer to sample a subtle range of mix designs at a large scale ranging from a yellowish to a grey colour using differing sand types and quantities.

We carried out the following in-situ testing techniques: 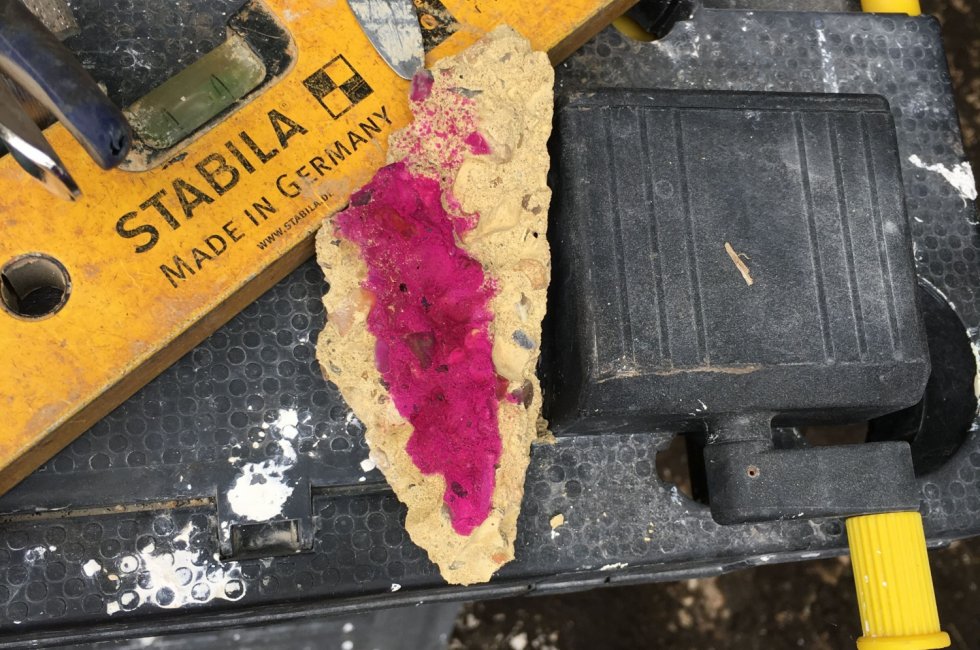 The concrete showing a PH greater than 9.

The rebar is protected by the alkaline, initially obtaining a thin flash coat of rust which prevents further rusting and deterioration. Over time as the concrete reacts with its environment the high levels of alkaline decrease. If the rebar is in the carbonated zone (usually closest to the surface) then it can begin to rust and potentially expand, aesthetically damaging the face of the concrete as well as destabilising the mass element. 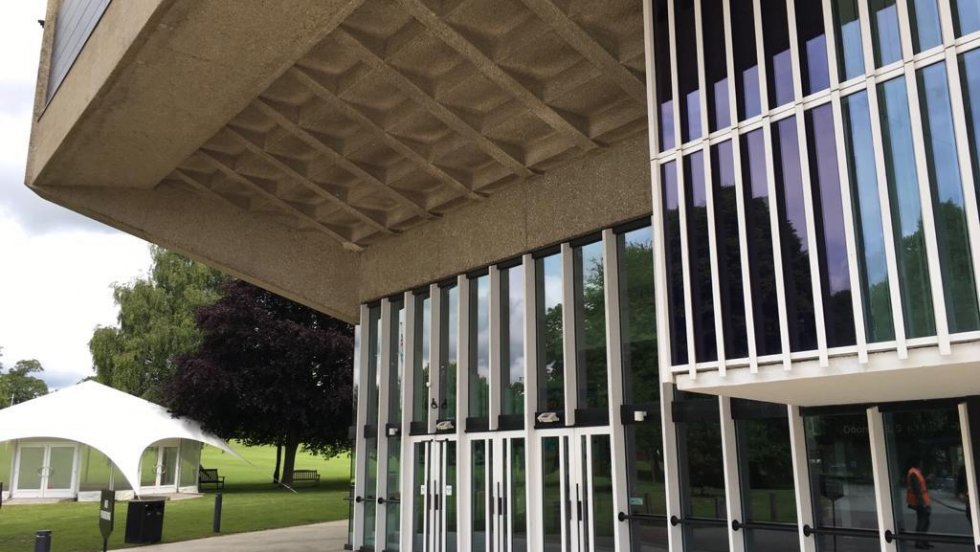 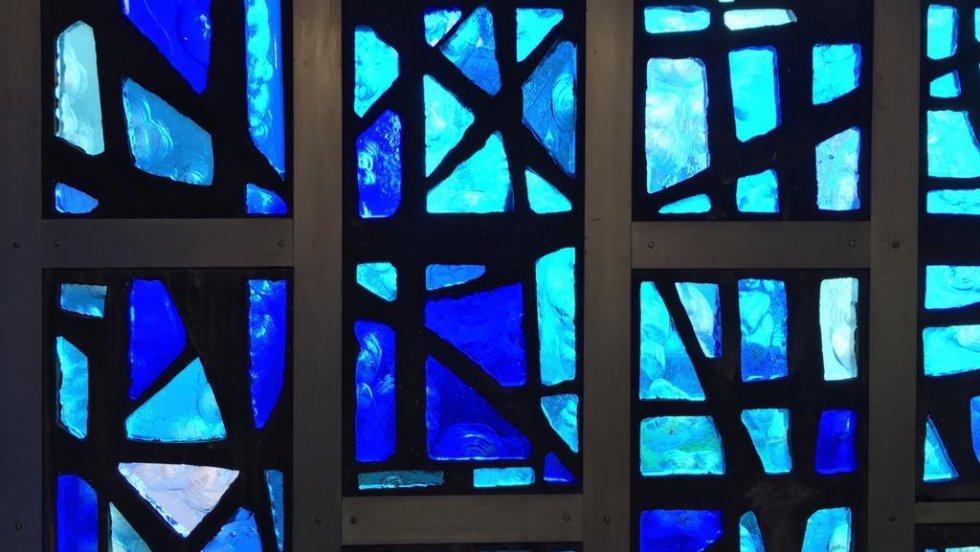 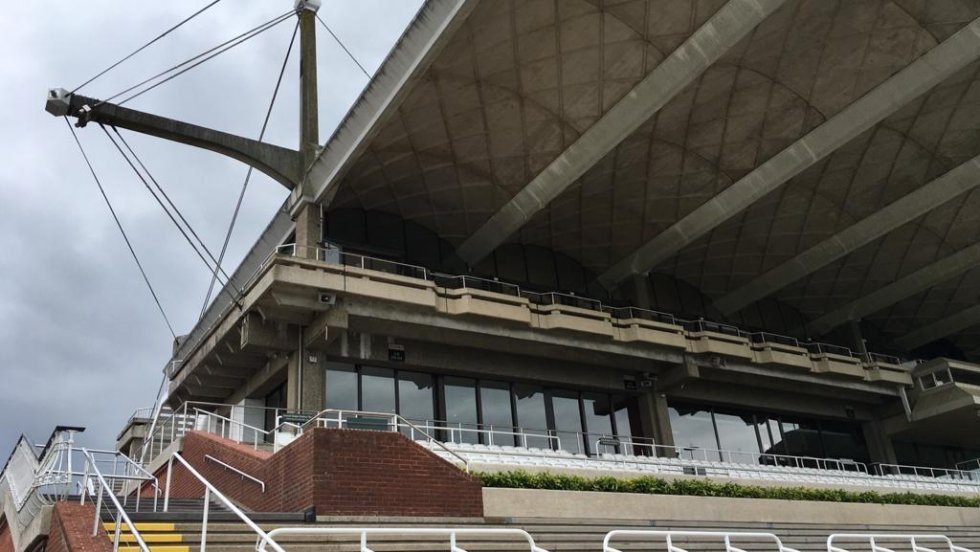 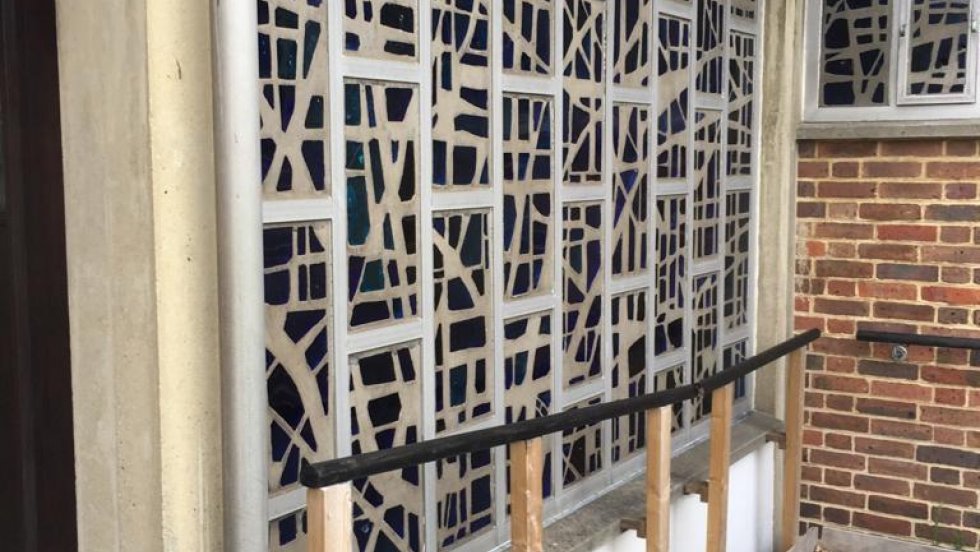 The last workshop carried out was investigating the process of the surface finishes used at the Elephant house in London Zoo. A cast was made following the original drawings for the Elephant House with projecting trapezoidal shapes and to a similar mix design.

One cast was mixed 9 days before and the other mixed 7 days before in order to see if it was more difficult to expose aggregate in either one. The older cast did seem marginally harder. We used chisels and a bush hammer to see which made a closer replica. Although we thought that the chisel gave an effect closer to the photo the original was apparently achieved using a bush hammer. 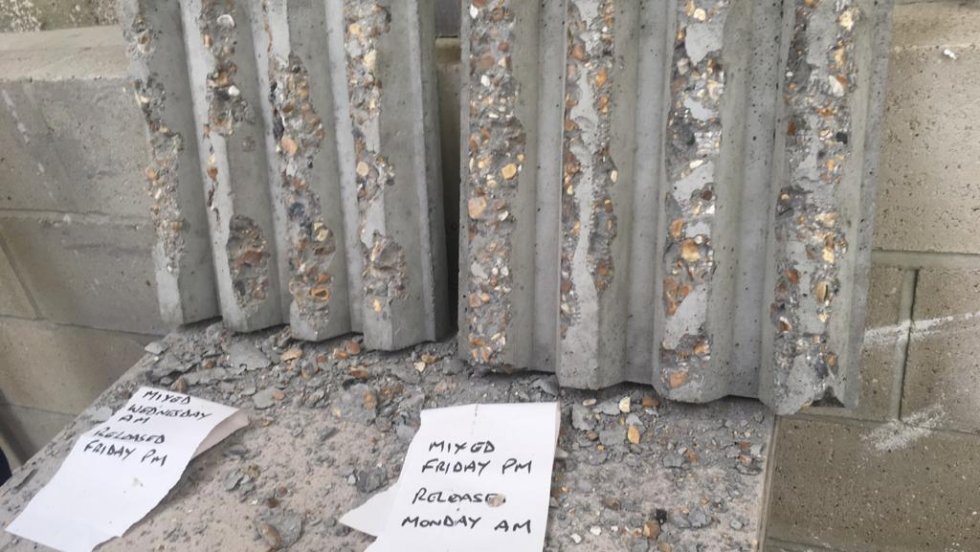 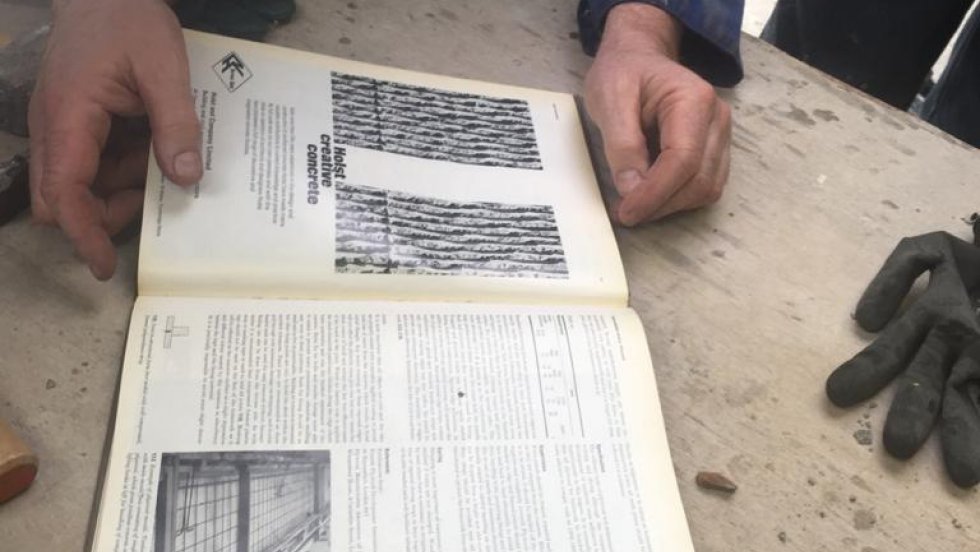 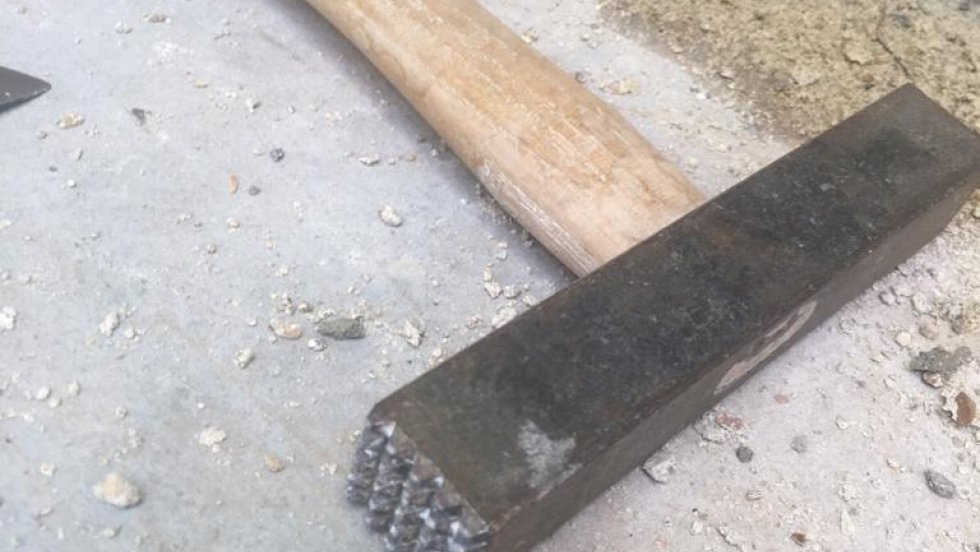 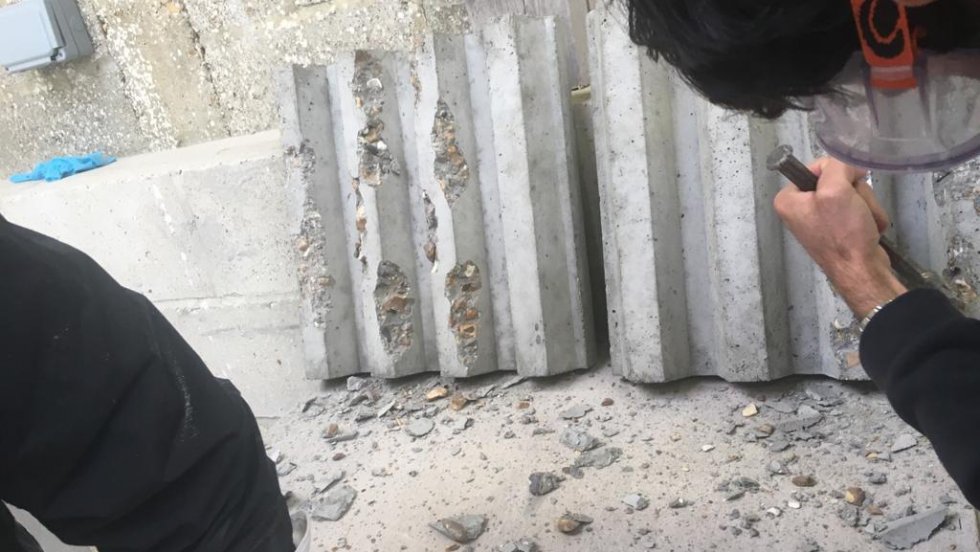 Natalie is going to follow up her attendance on the course with a CPD for staff that will look in more detail at the theory and the decision-making process for patch repairing concrete, drawing on some recent Purcell work and recent case studies from elsewhere.